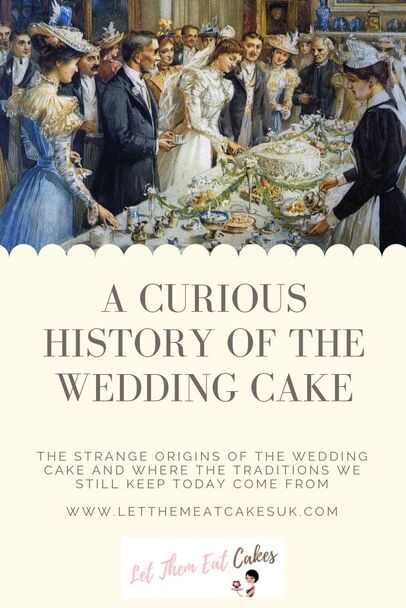 The Curious History of Wedding Cakes

The wedding cake has a long tradition in which its history dates back to the Roman Empire. This was long before the cake was elaborately decorated with beautiful icing and bouquets.

In the era of Medieval England, cakes were often breads that were unsweetened. There are accounts of several of these cakes or sweet buns being stacked in front of the newlyweds. The couple is believed to have had to kiss over the pile of cakes in front of them. Which goes to show that wedding cupcake towers are still, very much. in keeping with history and tradition!

In the 17th century, there was a popular dish called a “Bride’s Pie” that was used in place of a cake. The pie was filled with sweet breads, mince pie or mutton pie. These pies would have a glass ring that would be hidden in the pie and the women who found it would be the next to be wed.Early cakes were simple single-tiered plum cakes, with some variations. There was also an unusual notion of sleeping with a piece of wedding cake underneath one's pillow which dates back as far as the 17th century and quite probably forms the basis for the tradition of giving cake as a gift. Legend has it that sleepers will dream of their future spouses if a piece of wedding cake is under their pillow. In the late 18th century this notion led to the curious tradition in which brides would pass tiny crumbs of wedding cake through their rings and then distribute them to guests who could, in turn, place them under their pillows. The custom was curtailed when brides began to get superstitious about taking their rings off after the ceremony.

The popularity of tiered wedding cakes came, legend has it, as a result of a baker’s apprentice in late 18th-century London. The story goes that William Rich set up as an apprentice in Ludgate hill and fell in love with his boss’s daughter. When he asked her to marry him he wanted to impress her with a large, beautiful cake and his inspiration came from the spire of St Bride’s church. However, there are no surviving records of this cake. Wedding cakes reached their high popularity point in the 1800’s in both Europe and the United States. A very famous wedding cake of this time period was that of Princess Louise, Queen Victoria’s daughter. Her cakes stood five feet high and weighed about 225 pounds. Another famous cake was that of Princess Elizabeth and the Duke of Edinburgh. Their cake stood nine feet high and weighed 500 pounds! The cake was four tiers and featured sugar replicas of Buckingham Palace, Windsor Palace and Balmoral Palace.

The multi-tiered cake was originally reserved for the English royalty. They would also use these cakes for christenings, as the wedding and christening events would take place very near each other. This fact rationalized the thought that all weddings should have three tiered cakes. The bottom tier was for the wedding reception, the second tier would be distributed amongst guests and the third tier would be for the christening. As the wedding and christening became disassociated with each other, the top tier was then saved by the bride and groom for their first anniversary. The top tier is now considered a nice reminder of their wedding day.

It was the marriage of Queen Victoria and Prince Albert in 1840 that really set the fashion for weddings – the dresses and cakes both became big and white as a norm. In the minds of most people, wedding cakes are supposed to be white. The symbolism attached to the colour white, makes explaining this tradition rather simple. White has always denoted purity, and it relates to white wedding cake icing that first appeared in Victorian times. Another way in which a white wedding cake relates to the symbol of purity, has its basis in the fact that the wedding cake was originally referred to as the bride's cake. This not only highlighted the bride as the central figure of the wedding, but also created a visual link between the bride and the cake.  Previous to Victorian times, most wedding cakes were also white, but not because of the symbolism. Ingredients were very difficult to come by, especially those required for icing. White icing required the use of only the finest refined sugar, so the whiter the cake, the more affluent the families appeared. A white wedding cake became an outward symbol of affluence. As time went on sugar became cheaper and it became much easier for working class families to imitate the weddings of the rich.But of course this affluence couldn’t last, and wartime rationing rather limited wedding cake options. During the Second World War there were strict rations so cakes were much smaller. The average person would have probably had some ingredients donated from friends and relations. Others used deceptive tricks so their cakes looked the part. Gravy browning made fruit cakes look richer or cardboard cakes were rented and the real, smaller cake was concealed inside.

Cake decorations also developed with the size and beauty of wedding cakes. Pillars were used in early-tiered wedding cakes as a way to support the many upper tiers. In order to keep a cake from sinking, the bakers began to harden the icing for support.

Cutting of the Cake Tradition.
Wedding cakes take centre stage in the traditional cake cutting ceremony, symbolically the first task that bride and groom perform jointly as husband and wife. This is one tradition that most of us have witnessed and wedding photographers have captured many times . The first piece of wedding cake is cut by the bride with the "help" of the groom. This task originally was delegated exclusively to the bride. It was she who cut the wedding cake for sharing with her guests. Distributing pieces of wedding cake to one's guests is a part of that tradition from the Roman Empire when guests clamored for the crumbs. But, as numbers of wedding party guests grew, so did the size of the wedding cake, making the distribution process impossible for the bride to undertake on her own. Wedding cake cutting became more difficult with early multi-tiered cakes, because the icing had to be hard enough to support the wedding cake's own weight. This made cutting the wedding cake a joint project. After the cake cutting ceremony, the couple proceed to feed one other from the first slice. This provides another lovely piece of symbolism, the mutual commitment of bride and groom to provide for one another.